The c. 130 (N-S) x 100 (E-W) km Ljusdal Batholith is a major unit in the Svecofennian of central Sweden. It is located south of the Bothnian Basin, which is a marine Palaeoproterozoic metasedimentary sequence, and continues eastwards to the coast of the Bothnian Bay (Fig. 66). The northern and western boundaries of the batholith coincide with the Hassela Shear Zone (HSZ) and the Storsjön-Edsbyn Deformation Zone (SEDZ), respectively. To the south, the granitoids of the batholith have a complex boundary to the rocks of the Bergslagen region (Delin 1993). The batholith is composed of different calc-alkaline rocks, ranging in composition from tonalite to granodiorite; granite sensu stricto is less common (Delin 1989a, b, Delin & Aaro 1992, Sukotjo 1995).

The granitoids vary from fine-grained equigranular to coarse-grained megacryst-bearing types. The latter are referred to as Ljusdal granites and often appear as augen gneisses. Although generally metamorphosed and deformed, the Ljusdal granites resembles locally some varieties of the Revsund suite. The granitoids within the Ljusdal Batholith belong to the synkinematic suite of intrusions, and have emplacement ages of c. 1.85–1.84 Ga (Delin 1993, 1996, Welin et al. 1993). They are the youngest rocks of the suite and their ages overlap those of the oldest TIB intrusives.

Intrusive rocks with similar ages have also been found to the north and to the west of the batholith (Delin 1996, Delin & Persson 1999, Högdahl 2000a). Remnants of older Svecofennian supracrustal rocks exist within the batholith and in the vicinity of these rocks garnet porphyroblasts have occasionally formed in the granite. Some of the supracrustal rocks are well-preserved (Los and Hamrånge areas) while others are intensely migmatised, particularly in the granulite grade areas in the east. A major part of the Ljusdal Batholith has been affected by amphibolite facies metamorphism(Lundegårdh 1967, Lundqvist et al. 1990, Bergman & Sjöström 1994, Sjöström & Bergman 1998, Delin & Aaro 1992). However, in certain areas granulite facies conditions prevail (Lundegårdh 1967, Sjöström & Bergman 1998).

Close to Hudiksvall, monazites indicate a minimum U-Pb age of 1826±2 Ma for that high-grade low-pressure metamorphism (Sjöström & Bergman 1998). The batholith has locally been affected by intense deformation. At least two phases of regional folding has been recorded. It has also been truncated by several WNW-ESE, generally oblique, dextral c. 1.8 Ga old plastic shear zones such as the HSZ (Sjöström & Bergman 1998, Högdahl 2000b)

Högdahl, Andersson and Eklund. 2004: The Transscandinavian Igneous Belt (TIB) in Sweden: a review of its character and evolution. Geological Survey of Finland. s. 101-102 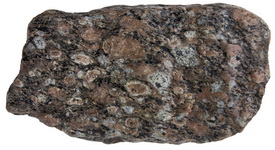